A downloadable game for Windows

Your memory has faded away. All that remains, is the horrid state Blandville is currently in. Dark. Cold. Abandoned.

It once was a place of your childhood happiness. None of that exists anymore. The question remains - why? What happened here? Where did all that beauty go, and what has taken it away?

This is an early version (0.1) of the game. There's one chapter available. Bugfixes and more content will soon arrive!

SVDARK74 days ago
Very nice game, really well done, by the way, I can fly with a sled :D
Reply
MattIvory322 days ago

enjoyed for a while BUT: a map could really come in handy, i personally got lost way too often and found myself running in circles. The lighthouse would be a great waymarker if you could add some light to it. Also the Cryptids become really attracted to me whenever i try to carry anything with me and they sort of started camping the only area i wanted to move to.

Did not beat the game :( Had fun tho!

This was pretty fun game! I was very spooked at first, but as I got a handle on the game, just kinda started to get annoyed with the amount of monsters roaming around, even if it is a large map. Speaking of the map, it is pretty large, and without being able to see very far because of the blizzard, I found myself getting lost quite often. By the end I just kinda started roaming the outer edge of the map cause I was pretty sure I grabbed everything from the houses that I could but was still missing stuff, but anyway I feel like a physical map to look at would be super handy just caue sense of orientation and direction can get pretty messed up in a blizzard. I feel like that would actually help players make sure they've explored every nook and crannie, even if those spots aren't important, players would still want to see what might be over in that area they haven't checked yet and could possibly finish the game without it taking forever. I'll give a follow so I can stay up with updates (hoping for that map lol) and maybe again one day when i have time, check it out again to actually finish it. Made a video, hope you enjoy!

Awesome game! I couldn't beat it and it scared the crap outta me but I loved it! Great atmosphere, nice concept with the collecting things while avoiding scary monsters. I would love to see more like it or just more stuff from this creator!

I enjoyed a lot playing this game. I loved the feeling of thrill and fear that lurks in every corner. I can't wait for the full version.

Blandville is anything but bland. It sets you on a mission, and plants you in a spooky town with a equally spooky wintry atmosphere. The town would probably be rather comfy if it weren't for the unsavory spooky bois wandering about, but then I suppose it wouldn't be horror, and it'd just be stealing other peoples things - probably better off if it stays like this. I really like that Blandville leans more into the spooky atmosphere than cheap jump scares. The clear definition of a goal is also appreciated, I can immediately set out and shit myself while looking for stacks of cash and other valuables. Overall I think you've got a nice little demo of a game here, and I'd love to see more content added to it. :)

A couple of worthy mentions for things I encountered that probably shouldn't happen. I went for a magical sleigh ride. If you stand on the sleigh and pick it up you'll be able to fly anywhere and everywhere. That includes the fence and the "unsafe zone". First time around I landed with the warning on my screen and was promptly snatched by a hooded figure. The second time I landed a little ways after it disappeared and right next to a guy stuck in the ground T-posing.

For an early version this is really great!! I love the concept and the art style and you've set the ambience really well.

I know, but not gonna lie, kinda rushed it out. Lots of pressure from the actual projects I'm working on, but I still think it came out rather nice. Thanks again! 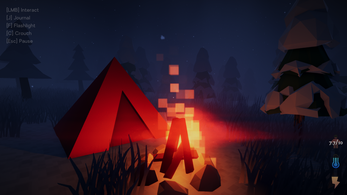 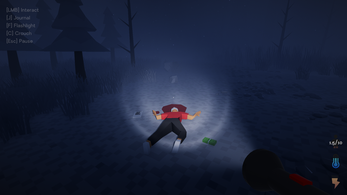 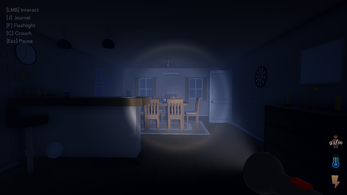 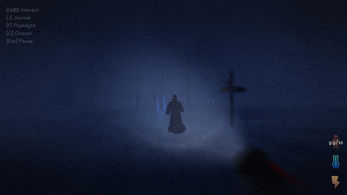 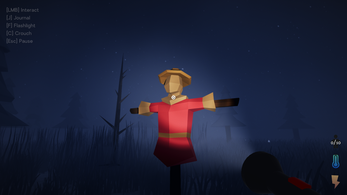